The Arabian Racing Organisation (ARO) was delighted to see Hayyan complete the French – UK Derby double when the Frédéric Sanchez trained colt won the President of the UAE Cup (UK Arabian Derby) Group 1 PA at Doncaster this afternoon. Bred by HH Sheikh Mansoor bin Zayed Al Nahyan and running in the colours of his YAS Horse Racing Management, the four-year-old son of Munjiz thrilled the Doncaster crowds winning by a neck under Ioritz Mendizabal from Melabi and Julien Augé.

This was the final top-level contest of the UK Arabian racing season and was the last chance for the four-year-old classic generation of Arabian colts, fillies and geldings to compete at Group 1 PA level in Europe.

Speaking alongside YAS Horse Racing’s Manager, Theirry Delegue, after the race Sanchez confirmed: “It is possible he may have one more race this season, but we will need to discuss what happens next, once we see how the horse comes out of the race. I am delighted to win both the French and UK Derby’s with him.”

Medizabal described Hayyan as “A very talented colt, however he is not an easy horse to ride. Sometimes he is much too keen in the early stages of the race, but today he settled really well.” 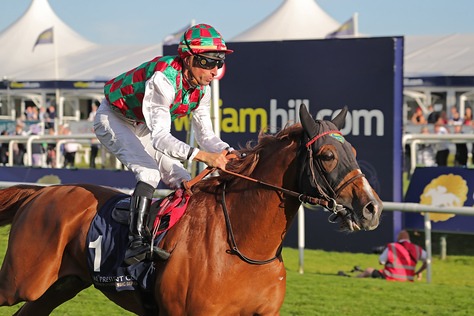 The President of the UAE Cup is the oldest Purebred Arabian race series and it is fitting that it is to be held on the same card as the UK’s oldest thoroughbred classic, the William Hill St.Leger. Run over a mile and a quarter, The President of the UAE Cup resumed its’ association with the UK Arabian Derby in 2016 and is exclusively for four-year-old Purebred Arabians with a prize fund of £80,000. For the last two seasons it has been won by the winner of the French equivalent, in Nafees and Rodess Du Loup.

Faisal Al Rahmani, General Secretary for the President of the UAE Cup series and Chairman of the International Federation of Arabian Horseracing Authorities (IFAHR) said: “The President of the UAE Cup Series sponsoring at the legendary St Leger meeting is indeed an honour.  We believe that the series is encouraging Arabian racing to re-establish a following in countries where it had been lost, such as Germany where we held a race earlier this year.

He continued: “The support of this series and that of IFAHR has also been of great benefit to other countries such as Italy who have embraced the sport and encouraging the breeding programs which will help to secure the future of Arabian racing worldwide.”

Genny Haynes, ARO Commercial and Finance Director was pleased commenting. “This is the fourth running of the President of the UAE Cup (UK Arabian Derby) at Doncaster and it is significant that for the third consecutive year, the winner of the French equivalent has secured their place as the leading four-year-old of the European season. That these horses are then capable of going on to secure further Group 1 PA success as their careers develop as both Lightning Bolt and Nafees have done is also extremely important to ARO.”

“We are very grateful to the President of the UAE Cup Series for their continued generous support. Holding the race on St Leger Day further enhances the status of the contest and the reputation of UK Arabian racing, with it being run as part of Doncaster’s most prestigious meeting of the year.”